Incident Report Guide: All You Need To Know

What is an Incident Report?

An incident report is a tool that documents any event that may or may not have caused injuries to a person or damage to a company asset. It is used to capture injuries and accidents, near misses, property and equipment damage, health and safety issues, security breaches and misconducts in the worksite.

What is the Purpose of Incident Reporting?

The purpose of incident reporting is to record an incident, determine its possible cause, document any actions taken, and make it known to stakeholders. An incident report can be used in the investigation and analysis of an event. It includes the root cause and corrective actions to eliminate the risks involved and prevent similar future occurrences. Incident reports can also be used as safety documents that indicate potential risks and uncontrolled hazards found in the worksite.

An incident report can be used by:

Incident reporting is the process of documenting all worksite injuries, near misses, and accidents. An incident report should be completed at the time an incident occurs no matter how minor an injury is. This article covers an in-depth explanation of the incident reporting procedure and the types of events you should report.

Incident reporting has already been an established idea that is initially intended to promote and improve safety in the worksite. However, most of the workers still do not comply with this protocol. The management and their workers should know why incident reporting can not only improve an organization’s safety but also help the business to stand out from others and most importantly, can help create a sound and healthy working environment and culture for workers.

In the event when an incident happened at work, documenting and reporting the details to the management can induce immediate and necessary measures to be taken. By doing this, worse situations and occurrences can be prevented. This also heightens the seriousness and gravity of any incident reminding all workers that these events should be reported whether big or small. Furthermore, taking action immediately also helps leaders and managers to magnify their responsibilities in ensuring a safer place for their workers.

#2 Hazards and Threats Communication and Awareness

Communicating threats, risks, and hazards to all concerned and affected workers in an organization help raise awareness of possible dangers that may come. Doing so will help leaders and supervisors to ensure preventive measures are in place in case things should go wrong. This could be an essential tool for industries in which tasks are associated with the highest risks such as the construction, manufacturing, mining industries, and even offices which are prone to accidents because of the potential hazards that can be overlooked. More so, getting to understand these hazards can enforce everyone to be more proactive in spotting these threats and resolve them immediately.

Possible threats could be:

An incident report provides a clear picture of what an organization should focus on resolving.  It also gives valuable insights into what processes need to be changed, improved, or eliminated. This also helps the management to implement new policies and regulations to be able to determine the efficacy of these changes to safety and quality. This could also mean critical assessments of whether the workers would need more skills training or better equipment provision.

Difference From a Police Report

These two terms are often perceived as of the same kind. However, the main difference falls on the one who completes it. Obviously, a police report is a detailed documentation of a crime written by an officer or any representative of a police department who was present at the crime scene. On the other hand, an incident report can be written by anyone, as mentioned above, who wants to report any events that might or might not have caused harm to someone or something. Police reports require an investigation to follow, while an incident report can be used as a supporting document to an investigation or analysis of events.

What is Considered an Incident?

Generally, an incident is defined as any event, condition, or situation which:

Here are 4 types of incidents you should report:

How do you Write an Incident Report

An incident report should state all the essential information about the accident or near-miss. It should contain the following key elements to ensure that all facts and necessary details are complete and properly documented. Take a look at some incident report examples here.

An incident report should be:

Keeping your incident report factual would require you to know the different types of information that you can gather during the incident reporting process. Here’s a list of facts that would guide you during the documentation of an incident:

The layout of information in an incident report form may vary depending on a number of factors. As a general rule, you should write incident reports in the third person since its purpose is to be objective; stating only facts and avoiding the inclusion of opinions and biases. Below is an example incident reporting format you can use for your operations. It contains all the essential information you would need to include in order to complete an effective incident report:

Following the outline of an incident report form, the first thing you would want to collect are the fundamental information. You can do this by answering the following questions:

Using the scenario above, the first section of your report would begin to look something like this: In our incident report example, we took advantage of adding photo evidence to better illustrate the environment where the incident took place. Notice that the photo attached had an annotation. Annotating gives the reader(s) of your report a clearer idea of what to look at. It is helpful in cases where the area of the incident is wide and contains a lot of elements.

Step 2: Take Note of Any Damages and Injuries

The next thing you would want to do is to determine the results of the said incident. Did it cause any damage or injure anyone? If so, you should describe it in detail and if appropriate, provide photo evidence of the damage.

Continuing with the scenario, it was determined that the incident caused injury to one of the employees. According to the company’s physician, the injury obtained might only be muscle bruising. However, under the physician’s orders, the injured employee underwent other medical tests to determine other possible injuries. Using this information, you can then include it in the report like this:

Provide the names of the people involved along with their job details such as title, shift arrangement, and other relevant information. Using the same example, the individual who obtained the injury, Samuel, is taken note of along with his job details in the incident report.

Record the names of people present during the incident and gather their statements. These will be valuable in understanding the sequence of events that led to the incident and may even provide you a better insight into whether or not the behavior of the affected employees was a factor that contributed to the injury or damage. Witnesses’ statements can be noted verbatim or paraphrased. Remember to have the witnesses sign off on their statements to verify the accuracy of what has been recorded.

Continuing with the given scenario, it was determined that another employee was with Samuel when the incident occurred. His name and statement are included in the report and he is asked to sign off to attest that everything he said wasn’t hearsay. 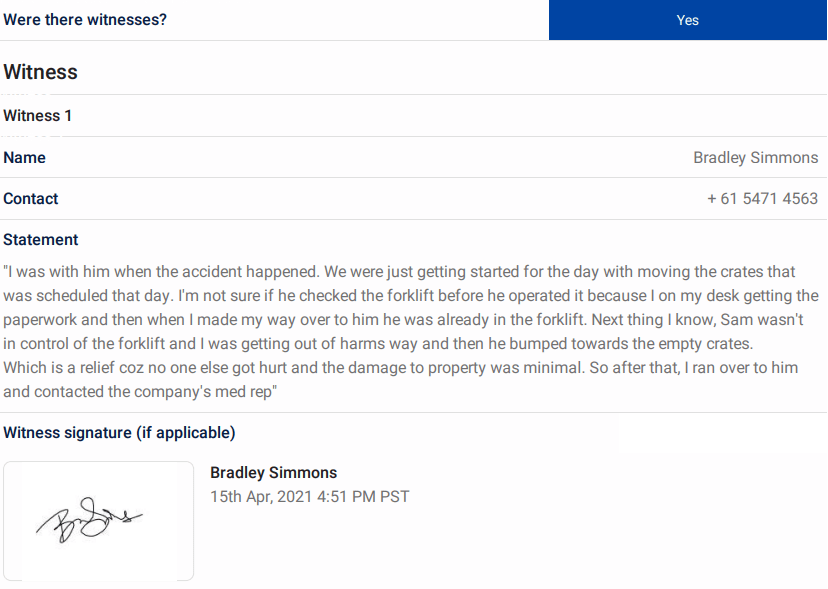 For example, in the scenario, in Bradley’s statement (the witness), it was discovered that the incident may have occurred due to Samuel’s (the injured employee) failure to perform a pre-start inspection of the forklift before operation. To verify this, you may assign members of your organization to check security footage and maintenance records of the forklift used. With that, the report would look something like this:

Upon completion of the previous sections, you may collect management’s comments on the incident. For accountability measures, you, as the reporter, and someone from upper management should sign off. This will validate that the information stated in the incident report is truthful and unquestionable.

Following the same sample scenario, the incident report will then look like this: 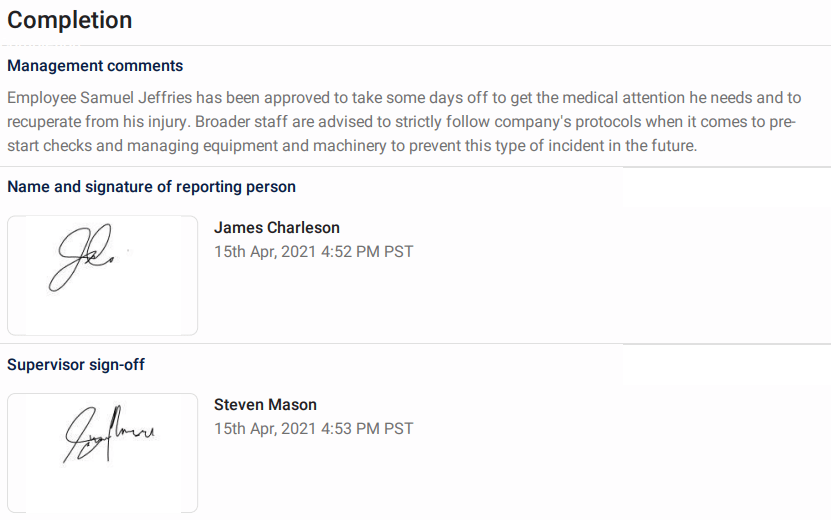 What to Do After

The purpose of investigating an incident is not to find fault but to determine the root cause and develop corrective actions to prevent similar incidents from happening. An investigation also helps fulfill regulatory requirements such as OSHA 300 Forms in the United States and Reporting of Injuries, Diseases, and Dangerous Occurrences Regulations 2013 (RIDDOR) in the UK and determines the costs involved with property or equipment damage (if any).

Incident reports should be properly kept as they are an important record of every organization. Creating incident reports can be time-consuming and requires rigorous documentation of the incident. However, understanding the purpose of incident reporting will help the organization determine the root cause of an incident and set corrective measures to eliminate potential risks. iAuditor is the world’s #1 inspection app and can be used to streamline the completion and record-keeping of incident reports. With the iAuditor mobile app and web platform you can:

Get started with iAuditor by downloading these top 10 incident report templates you can download and customize for free.

iAuditor gives you the flexibility to power any inspection you require – onsite, underground, and across the globe. Inspect construction sites, restaurants inspections for food safety, conduct temperature checks, pre-flight checks, toolbox talks and more. It is the mobile forms inspection solution for all industries.

iAuditor is the world’s #1 cloud-based inspection app used to convert paper forms to digital checklists. Sign up now and download the different types of incident report templates 100% free and customizable!

Carlo Sheen Escano is a contributing writer for SafetyCulture based in Makati City, Philippines. Sheen has experience in digital marketing and has been writing for SafetyCulture since 2018. His articles mainly discuss risks in the workplace and well-known safety and quality processes used to mitigate them. Furthermore, Sheen is passionate about providing insights to global customers on how technology can help them to do the best work of their lives.

Carlo Sheen Escano is a contributing writer for SafetyCulture based in Makati City, Philippines. Sheen has experience in digital marketing and has been writing for SafetyCulture since 2018. His articles mainly discuss risks in the workplace and well-known safety and quality processes used to mitigate them. Furthermore, Sheen is passionate about providing insights to global customers on how technology can help them to do the best work of their lives.