A Guide to Force Field Analysis

This simple guide will discuss the following: what is force field analysis, what are its advantages and examples, and how organizations can use it in implementing changes in business processes 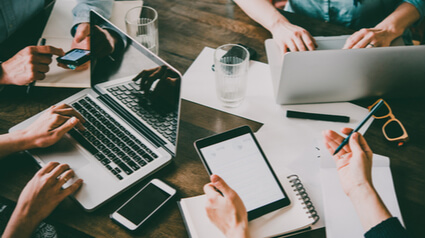 What is Force Field Analysis?

Force field analysis is a widely-used decision-making tool that organizations utilize in determining the importance, impact, and influence of various factors before implementing changes in business processes. Once the objectives and goals are defined, this method helps put corresponding values to the listed driving forces and restraining forces of a proposed change. The idea behind force field analysis is that after examining the values of the factors driving or restraining the change, the method should result in a recommendation to either strengthen the forces for change or weaken the forces against change. Businesses can then use this recommendation as a well-grounded basis for deciding whether or not a proposed change should be implemented.

The force field analysis is a principle developed by Kurt Lewin, a German-American social psychologist. He used this concept for his work in social psychology, primarily for determining the external and internal factors that affect one’s decision. In Resolving Social Conflicts, he states that: “To bring about any change, the balance between the forces which maintain the social self-regulation at a given level has to be upset”.

This method supports the principle that in order to implement a proposed change, driving forces should be stronger than restraining forces. Businesses can now use this concept to weigh such factors before modifying their processes with the goal of improving operations.

One of the primary advantages of using force field analysis as a decision-making tool is that it provides a visual representation of the factors surrounding the proposed change. It also takes into consideration the impact of these factors on the final decision. Some other advantages of applying this concept are as follows:

How to Conduct a Force Field Analysis: A Step-by-Step Guide

Since force field analysis is best used in a set-up wherein a whole team, process, or organization may be affected by a possible change, remember to keep everyone on the same page by allowing them to include the factors that they consider to be important and other elements that may not initially be apparent. Conduct your force field analysis by following this step-by-step guide:

Start the analysis by stating the proposed change, describing the elements, and enumerating the objectives. This would give a clear perspective on how to best address the situation. Additionally, as this method aims to improve a current process or processes, acknowledging the possible consequences of not implementing the change would also be a good starting point.

This is the step where you’ll list down all the factors that are in favor of implementing the proposed change. Make sure to keep everyone in the loop and brainstorm with your team so that they can share their observed driving factors. List as many factors as possible to help establish the need for the change. Once done, individually place the identified factors on the left part of the diagram.

Subsequent to the second step, this is the part where you’ll list down all the factors opposing the implementation of the proposed change. Make sure to include as many factors as possible so that they can be weighed objectively and addressed proactively. Once done, place the identified factors on the right part of the diagram.

Evaluate the impact of the identified factors in this step by incorporating a score to each one. The scores attached to each factor can vary depending on the user, but the most utilized are scores of 1-5 and scores of 1-10, 1 being the lowest and 5 or 10 being the highest. Just remember to be careful with how the scores correspond to the value of the factors since the scoring can be subjective. It would be best to also get your teammates’ perspective on how each factor will be scored.

Once you’re done with giving scores to each factor, you can now tally them to see which side weighed more by summing them up. The general goal of using this type of analysis is to ensure that for a change to be implemented—the driving forces should be stronger than the restraining forces.

If the forces for change summed higher, you can proceed with the implementation of the change.

If the forces against change are higher, you can either think of processes that could strengthen the drivers or weaken the restraints. If not, it may be best to postpone or stop the plan altogether and look for other ways to address the identified need for change.

Below is a situational example of using the force field analysis in the pursuit of improving business processes:

Background: A software company is planning to embrace the hybrid working arrangement for its employees. There are identified factors that support and oppose the change so management would like to weigh these and see if they can push through with the plan.

(Note: This example will utilize the scores of 1-5)

From what you’ll observe in this example, the driving forces or supporting factors summed higher than the restraining forces or opposing factors. The company can take this result into consideration and push through with the planned hybrid working arrangement, and at the same time look for ways to further weaken the opposing factors before implementing the change.

SafetyCulture (formerly iAuditor) as Your Tool

Force field analysis is more efficient when relevant stakeholders can directly access files or documents to ensure that everyone is on the same page. SafetyCulture is a powerful digital tool that businesses can use when applying the force field analysis method in implementing changes. With SafetyCulture, you and your teammates can access specific files at the same time and directly input any notes that you may have by modifying access levels accordingly. SafetyCulture also allows you to do the following:

Companies can use this template to conduct a force field analysis before they implement changes in business processes. This template also allows you to do the following:

Jaydee Reyes is a content writer and researcher for SafetyCulture. Her six-year experience in the field of data research and media monitoring adds expertise and quality to her work. She is also a champion of leveraging technology to promote a culture of safety in workplaces around the world. As a content specialist, she aims to help companies adapt to digital changes through interesting and informational articles.

Jaydee Reyes is a content writer and researcher for SafetyCulture. Her six-year experience in the field of data research and media monitoring adds expertise and quality to her work. She is also a champion of leveraging technology to promote a culture of safety in workplaces around the world. As a content specialist, she aims to help companies adapt to digital changes through interesting and informational articles.